Protests and Counter-Protests in D.C.

As anti-war, anti-Bush, and, it appears to me, anti-U.S. protestors descended (from the moral high ground?) on Washington D.C. yesterday, I found it heartening to see counter-demonstrators making their own appearance in support of our country, our troops, and our fight. I wish I had been there to stand with them.

Instapundit has linked to various efforts to photoblog the day, here and here. Boatloads of interesting pictures at Ed McNamara’s site and also at this blog.

I’m having trouble getting Blogger’s image upload support to work at the moment, so I hope these folks won’t mind my linking a few pics directly.

International A.N.S.W.E.R.: Authentically anti-war, or “pro-war, but on the other side”? 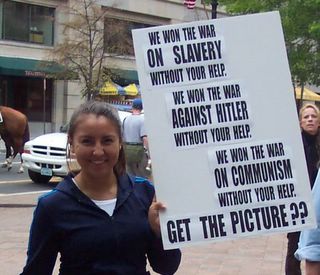 For new readers just tuning in: after outlining my goals for this blog in an introductory post and follow-up, and picking up again with another follow-up and an acknowledgment, I’m finally launching into the first post in what I hope will become a (brief) series, in which I intend to explore how I came to see the world the way I do, and address the question of whether and how my views have changed in recent years.

Rather than digress into a full autobiography that would unnecessarily bore my readers to sleep, I’m going to try to keep this focused on the details and experiences that seem to have been most influential in shaping my ideas and attitudes. There’s plenty of interesting stuff in the present and recent past that I want to get around to blogging about without much further delay, so I have motivation to keep this brief and stay on-topic. The way I envision the series now, I expect to get through it in about 5 or 6 posts. We’ll see how that goes.

I grew up in Los Angeles (yes, people do do that in “L.A.”, to greater or lesser extent), spending the first 20 years of my life there during the 70s and 80s. For those interested in the math, that puts me in my mid-30s now — wondering, as I think we all do now and again, where the time could have gone.

The older of two children, I grew up in a family with both parents (a fortunate situation that an early awareness of elementary-school classmates with divorced parents led me to appreciate), together with a lively and dear extended family centered around a nearby aunt and uncle and their two daughters. Thanksgivings, Easters, and Christmases were invariably spent around the semi-improvised dining room table of one sister or the other, enjoying good company, good conversation, laughter and meals that had been a much appreciated, hours-long-in-the-making labor of love. Now that my aunt is no longer with us, I miss the gatherings we used to have in those days all the more.

One might argue that as children we maybe aren’t as attuned to such things as adults are, but in my recollection my parents were almost never vocally political, and it was an extreme rarity for politics to ever come up in conversation, whether at home or at such extended-family gatherings. Implicitly it seemed there were many more important and interesting things in life, such as cherishing our time together and taking an interest in one another’s lives and happiness, and politics were a relatively less important matter and/or a personal one. This approach seemed perfectly natural to me then — so much so that I don’t think I ever took particular notice of it — and surely had an influence on my own attitudes. Having grown up in that kind of environment, it’s no wonder that I get uneasy today when people not only freely bring up their politics in conversation, but seem to assume that others must naturally share their (implicitly correct) views and opinions. In hindsight, it’s perhaps an aspect of the bubble of my childhood that did not prepare me well for conflict. But on the other hand, I will say that I think there’s something to the perhaps old-fashioned notion that such topics might not be considered polite conversation in presumably “mixed company”. There’s a sort of humility to that seemingly forgotten convention that I would think might appeal to people who today advocate for tolerance of diverse viewpoints, though it evidently does not. As a result, in my adult life I have often found myself uncomfortably in the middle of an unexpectedly political conversation, looking for an exit.

Since early childhood, I have always been interested in figuring out what enabled people to be successful, in the sense of being happy and fulfilled. A reasonable level of material success was something I came to see as part of that, but as a helpful potential facilitator rather than the end goal. For certainly there were people who were rich and unhappy, and without question a deeply meaningful and worthwhile life could be had without the requirement of material success or reward — yet, by the same token, it seemed that a person with goals and interests would do well to acquire sufficient means to support himself in their pursuit. The key seemed to be to find what you loved doing, and then figure out a way to make that your livelihood, so that you could devote your time and attention to doing it. It wasn’t going to be easy getting started, and some began with greater obstacles ahead of them than others, but enough had made it to show that it was possible to get from anywhere to anywhere. The essential and indispensable ingredients, it seemed to me, were passion, determination, perseverance, integrity, hope, resourcefulness, a basic faith in life and humanity, and a can-do attitude. I sought out examples of that attitude and the success it produced, among both the famous and the people around me, and thought about the things I felt passionate about doing and how to make the recipe work for my life.

The flip side of this was noticing the self-defeating things that people so often did (all too frequently, it seemed to me, out of disproportionate or unfounded fear), which in many cases caused them far more grief than anything that others, or their accidental situation in life, had done to them. Avoiding the trap of fear and self-sabotaging attitudes seemed to be another essential part of the recipe. An awareness of fear’s potential influence on us, and of the need to continually combat its debilitating effects in order to live a full life, continues to play an important role in the way I approach things. (I’m of course never quite as fearless as I aspire to be, but successful avoidance of fear’s deadly traps is a goal toward which I continually strive.)

Throughout high school, I worked the occasional catering job as a bus boy, dishwasher, and sometimes prep cook or waiter, as my way of earning spending money. (I had long hair back then, for reasons that I now find more difficult to fathom when looking at old pictures, and that usually, though not always, limited me to the back-room jobs.) Catering work in L.A. included everything from weddings and bar mitzvahs to Academy Awards dinners and private parties at the homes of the rich and occasionally even famous. I remember the vast majority of our clients as having been kind and generous, and now that I’ve begun to enjoy a modest measure of success in my own life I’ve sought to pass that generosity on each time the opportunity arises to tip someone for a job well done. I mention this because it’s one of the life experiences that comes to mind when I try to understand why I didn’t develop the same ingrained resentment of or vindictiveness toward people with money that I occasionally see in other people and in contemporary politics. The rich whom I had met were people living productive and creative lives whose blessings they seemed to genuinely appreciate, and who were doing one of the best things they could possibly do for me and my fellow-catering-temp classmates by hosting events that provided us with good student jobs. Within a few years, I would leave that springboard to begin pursuit of a more technical/scientific career, but I am grateful for those experiences, for the character and responsibility that they helped me to develop, and for the many fine people I worked with and for.

It’s been a bit of a strange feeling so far, going back to revisit my past, from the perspective of knowing what happened next, in an attempt to see and understand connections in my train of thought. In hindsight, though I wouldn’t begin to realize it until my college years, my tendency to avoid political engagement and conflict, and acquired convictions regarding the primacy of one’s own attitude and actions in determining the course of one’s life, were to put me on a collision course with the culture of contemporary liberalism as it had developed in the U.S. In the meantime, before my awareness of the points of divergence in my own perspective began to take shape, I would myself live as an least peripheral part of that culture for the next several years.