Thanks to the miracle…er, science and technology of podcasts, I just finished listening to yesterday’s especially great Penn Jillette Show, featuring extraordinary guest Richard Dawkins and several callers in discussions of atheism, morality, science and reason, in the context of Dawkins’ new book “The God Delusion.”

You can download the 10/25 podcast episode from pennradio.com or at pennfans.net.

I especially like the concept of these flyers that were designed as part of the book’s promotional campaign (I can’t find a good permalink to the source, but at the moment they’re here): 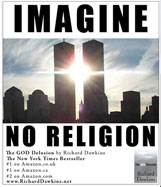 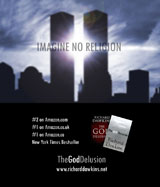 Man, if that doesn’t hit home.

Had I known that Dawkins was going to be a guest on the show, the question I’d have most liked to ask him would probably have been about the anti-rationalist “postmodernism” that seems to so dominate and hobble discourse in the humanities nowadays (at least here in the U.S.), and whether he sees it as yet another of the secular “vacuum-fillers” that tend to displace religiosity when it wanes, or perhaps sees it in some other way. Is it cause for worry, as some have asserted and as I tend to feel, or is it more of a passing intellectual fad whose ill effects are primarily limited to obscure, insular niches of academia and intellectualism?

Dawkins’ observation regarding this sort of ideological vacuum-filling phenomenon reminds me of a passage from Michael Crichton’s insightful 2003 talk “Environmentalism as Religion”:

It does seem to me, largely to my dismay, that there are underlying motivators toward what one might loosey call “religious” behavior in the human mind (in particular I’m thinking of the harmful fundamentalist aspects of that), that tend to allow for any number of other substitute ideologies to take the place of what we think of formally as “religion” when religion itself is not as prevalent. (Certainly there seem to be plenty of people who adhere to political ideologies with unbending fundamentalist fervor, which seems to me to fall into that category.)