Lots of good stuff to catch up on

I have more writing in mind that I hope to get to, including posting some brief post-election thoughts that I’ve been mulling over. Meanwhile, I’ve been occupied by the flood of particularly worthy and interesting writing by others that the election seems to have prompted. Following are some highlights that I’ve bookmarked with the intention of pointing them out, including some sober and probably sorely needed self-assessment from libertarian/conservative thinkers:

One benefit of a Democratic Presidency is that it will expose the myth that U.S. disagreements with our nations are all the fault of the Bush Administration. Take the failure of NATO, and especially Germany, to supply more troops for the war in Afghanistan.

The Continent’s free-riding on U.S. security while criticizing the way that security is provided predates the Bush Administration and will outlive it. President Bush has mainly provided Europeans with an excuse for refusing the kind of cooperation they’d rather not provide anyway. Mr. Obama has promised a multilateral surge of troops into the Afghanistan-Pakistan front. He may find, like Mr. Bush, that most of those troops will have to be American.

Hey, remember after 2004, when the interior of the country was viewed with deep suspicion for its insufficient interest in a John Kerry presidency? Crude maps called it JESUSLAND, a place opposed to liberty and education. Well, shuck my corn and call me Orville: the red part of the country has been reduced to something that looks like a mild case of contact dermatitis.

The solid block of flyover Christiansts who spend every Sunday hopping up and down so they can get a head start on the Rapture appears to have turned into enlightened change-agent lightwalkers, and in a mere four years. Or, the people in the middle of the country weren’t all weirdoes who still harbored a grudge against the Renaissance, and viewed the coasts as they were greedy remoras fastened on the Real America. In any case, no one will make mocking maps of them now.

I remember well the mocking of “Jesusland” that immediately followed the 2004 election, from the supposed standard-bearers of “tolerance” and “diversity”. It was one of the experiences that helped clarify for me that only certain kinds of diversity are to be embraced and celebrated in the contemporary multicultural order, and that certain utterances get an exception from the usual concerns about “hate speech”. I felt deeply ashamed of fellow Californians who I saw engaging in this disparagement of their countrymen, this tarring with a broad brush of stereotypes that would surely be condemned if applied to any other culture or group of people. The sight of a “Can we secede yet?” sign enthusiastically brandished at a San Francisco protest that broke out after the election filled me with gloom and despair. I heard people on the left threaten both before and after the election that they would leave the United States — move to Canada, Europe, or some other such haven of decency — if Bush were to win (or “steal”?) a second term. I heard the same threat repeated again before this year’s election, both from celebrities such as Susan Sarandon and from others around me. Katie Granju had a good response to that kind of talk, I think:

[I]f your civic investment in American democracy is so weak that it hinges on one single candidate or issue or election, then you probably would be happier elsewhere anyway…

As for the outcome of those threats/promises back in 2004, I feel entitled to complain that of all those who vehemently insisted that they were leaving the country, not one of them has sent me a postcard. Because they’re all still here!

The lesson, as always, is that things change. Things will change again. And I expect that the GOP leadership will conclude that since things do change, they can sit back and wait for it to happen again. Which is a recipe for ensuring that the next such map has a thin red line like the one you used to use to open a Band-Aid.

There does seem to be a risk of taking political pendulum swings for granted. Pendulums can get stuck, you know.

More from Lileks in “Monday delights” (see the original post for the accompanying graphic):

Conservatives cannot help but be saddened and left out – the only possible event that could lift their spirits right now would be a headline that said REAGAN, BACK FROM THE DEAD, EATS BIN LADEN AND CRAPS TAX CUT, but pictures like this reminds the right that no one was ever this happy about Bush, even when the love was at its zenith. No one put him with George, Abe and Frank before he took office. Really, he was just The Next Guy, a caretaker in a post-history world. People forget how much “compassionate conservativism” stuck in the craw back then; the party’s own standard-bearer modified the terms in a way that managed to insult, mischaracterize, apologize, and reshape the debate all at once. It would be like a Democrat running on a program of “Logical Liberalism,” and not knowing why his own followers found the catch-phrase unhelpful.

Anyway. There are rumors of new Executive Decrees, which include magic Federal dollars for stem-cell research that uses human embryos – if you have any objections, you hate science – and a ban on domestic drilling and nat-gas exploration in public lands in Utah. (If you have any objections, you hate the environment.) The two form a nice mirror image: the former was a ban put in place to preserve a particular definition of human life; the latter is a ban lifted to preserve the environment. Again, it’s understandable: we only have one Utah, but we can always make more people. As long as they don’t live in Utah.

Will executive unilateralism remain a bad thing, a threat to our rights, or suddenly gain favor with old critics? Hmmmm. Cue the Jeopardy! theme. That’s a stumper

Mark Steyn: The Death of the American Idea?

While few electorates consciously choose to leap left, a couple more steps every election and eventually societies reach a tipping point. In much of the west, it’s government health care. It changes the relationship between state and citizen into something closer to pusher and junkie. Henceforth, elections are fought over which party is proposing the shiniest government bauble: If you think President-elect Obama’s promise of federally subsidized day care was a relatively peripheral part of his platform, in Canada in the election before last it was the dominant issue. Yet America may be approaching its tipping point even more directly. In political terms, the message of the gazillion-dollar bipartisan bailout was a simple one: “Individual responsibility” and “self-reliance” are for chumps. If Goldman Sachs and AIG and Bear Stearns are getting government checks to “stay in their homes” (and boardrooms, and luxury corporate retreats), why shouldn’t Peggy Joseph?

He’s got a point.

Along that line, a particularly sobering assessment from the inimitable P.J. O’Rourke: “We Blew It”. As I’ve said before, I generally part company with O’Rourke on issues of war (roughly speaking, he’s more of a “Big ‘L’ Libertarian”) but he does make good points on a number of other topics.

[M]aybe this is again the early 1930s, ushering in 20, 30, 40 years of soft socialism and cynicism about markets, a bent for the bosom of the organized state over the seemingly fractious pursuits of individuals. It did happen before in America. If hard times instead freeze opinions in place, then we may be looking to a long haul.

Short term or long term, what is to be done by those still enamored of an America “conceived in liberty”?

On a related note, Fred Smith wrote before the election, on Oct. 15th:

A world where economic interests are disenfranchised – indeed, even de-legitimized – is a world that will have little regard for economic – and, thus, indivdiual – liberty.

Accompanying all of this, fresh threats from a seemingly forgotten enemy: Via ABC News: Osama Bin Laden promising an attack that “Will ‘outdo by far’ the attacks of September 11” and will “change the face of world politics and economics”. 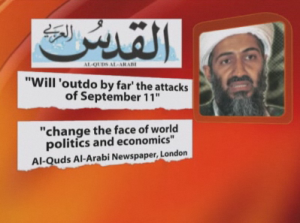 A promise that al Qaeda, in its present state, is capable of carrying out? — or just bluster? Let’s hope we won’t have to find the hard way.