Congratulations to visionary pioneers Burt Rutan, Richard Branson and team, on SpaceShipTwo’s latest milestone — a smooth and successful 11-minute solo glide flight yesterday, after being dropped from mothership Eve at 45,000 ft. Story here, and by all means watch the video highlights here.

Their achievement marks a significant step on the road to developing Rutan’s history-making SpaceShipOne prototype into a viable commercial space tourism platform. 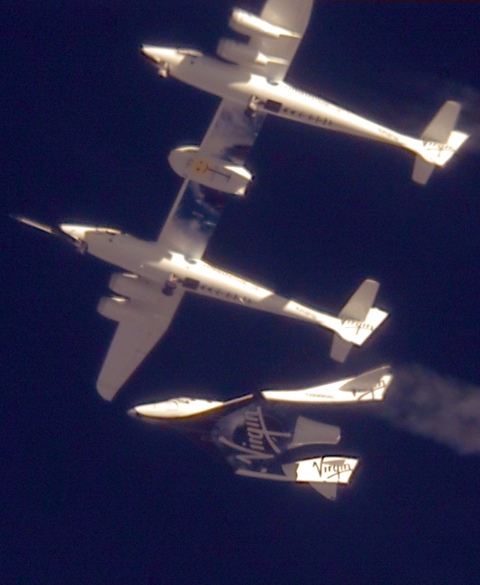 I think Johan Norberg is right: Entrepreneurs are the heroes of the world. Space is opening up for broader access, and it’s the efforts of can-do problem solvers like Rutan and Branson who will drive innovation and lead the way. My admiration for them, and gratitude that the human race can produce such people, is tremendous.

To any who missed the making of history the first time around, when in 2004 Scaled Composites’ SpaceShipOne won the Ansari X Prize for manned commercial space flight, I heartily recommend the Discovery Channel’s superbly done “Black Sky: ‘The Race for Space’ and ‘Winning the X Prize’” documentary. If it doesn’t get you all fired up about the future of space travel, nothing will. As Rutan said of a milestone on the road to that earlier achievement:

Clearly there is an enormous pent-up hunger to fly in space, and not just dream about it. We do want our children to go to the planets. We are willing to seek breakthroughs by taking risks. And if the business-as-usual space developers continue their decades-long pace, they will be gazing from the slow lane as we speed into the new space age.

Thanks to dreamers and doers like Rutan and Branson, the pace of development is accelerating, we are on our way to a promising and exciting future in space.

UPDATE 2010-10-13: Fixed the “Black Sky” documentary link and enclosing paragraph. (It’s easy to overlook a missing closing quote in a Markdown link title, but the result should have been more apparent to me in proofreading — text gobbled up until the next quote!)