Escape From the Cities?

Speaking of Bill, Steve, and Scott: While gathering links to their latest work, I ran across this Trifecta gem I’d completely missed last year, that resonates uncannily with a thought I’ve been mulling over quite a bit lately: Maybe cities are a mistake. So many of the problems and vulnerabilities we face seem to result from the helplessness and dependency that dense urban centers engender. Cities insulate us from the realities of what is and isn’t essential for our survival. Urban living saps us of our self-reliance, and deprives us of the continual, salutary testing and re-testing against nature that would otherwise drive us to cultivate essential skills and build resilience. It’s anonymizing, and leaves us dependent on corruptible and inevitably corrupt, wasteful, and unreliable centralized institutions, where we might otherwise develop mutual reliance on our neighbors in a more resilient, decentralized, voluntary web of trust for mutual benefit. City life makes it too easy for us to disconnect from reality, in ways that jeopardize our ability to deal with said reality when it rears its ugly head. We become, in a real sense, victims of our own success. Furthermore, dense urban centers make our thusly-concentrated populations easy targets for Jihadi lunatics who are just dying to prove the extent of their depravity on a massive scale.

I say all of this as someone who loves many of the products of city life — from technological marvels to universities, museums, and cuisine from all over the world — and has experienced life in many U.S. cities — from Los Angeles, where I grew up, to Berkeley, Oakland, San Jose, San Francisco, and New York. It just seems that the negatives have come to outweigh the positives, and we may benefit from a change in direction. Dense urban centers of population may be largely an Industrial Age relic that we’d do well to re-assess look beyond. In a time when much of our activity now takes place in a knowledge and service economy, it may be entirely possible to de-centralize our populations without abandoning (and perhaps even better facilitating) the continued advancement of positive technological developments.

Having moved to an 1880s farmhouse in northern New Jersey two years ago, I feel like I have one foot already in a more rural world, and the sense of well-being I’ve gained has led me to wonder what else I’ve been missing. I haven’t worried much about imminent Apocalypse since growing up in the 1980s under fear of a Soviet ICBM attack. But the direction things seem to be going in is awakening dormant prepper/survivalist instincts in me. If the center will not hold, how will the remnant of what we are keep the flame of civilization lit until we can make a way to piece things together again? It’s been decades since this old place was worked as a farm (with the benefit of surrounding acreage that’s since been sliced up and sold to home builders). But I find myself thinking: even if the results don’t make much of a dent in our weekly dependence on grocery stores, learning some basic skill with growing a few small crops might be a good and useful thing. (Stay tuned; maybe I’ll have some Spring planting news soon.)

This is the kind of stuff that’s been on my mind as I contemplate the short-term mitigation of circumstances we need before we’ll be able to achieve a longer-term way out to the next place. Bill, Steve, and Scott bring some interesting perspectives to the table in this Trifecta — and the Green Acres theme is a nice touch. I remember watching the show at my aunt’s house growing up. Maybe that was a foreshadowing of my life to come?

Crabapples are all we’re growing right now, by the way. Feeding the deer, and leading my 3-year-old son to ask with concern whether they contain tiny crabs, seem to be about all they’re good for. But the trees do give us some very nice flowers: 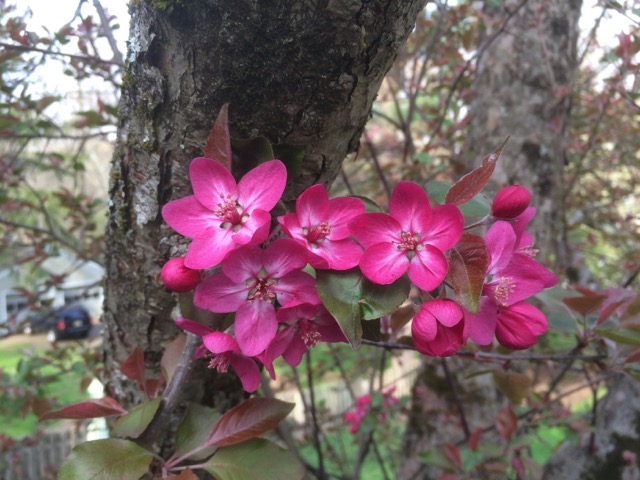