Whatever short-term mitigation of circumstances may fall out of the election results (I am not counting on anything, and expect very little), my long-term view of what we should working on hasn’t changed. There remains a strong and determined movement in the culture toward people wanting the State to provide for them and shelter them from freedom’s inherent risks, and I don’t see that shift abating — either in terms of people’s desires, or the state mechanisms they put in place to fulfill them. Progressivism operates like a ratcheting mechanism (credit to Bill Whittle for that apt analogy): It advances persistently, by gradual increments, and is only rarely reversed in small and temporary ways. Those of us who yearn to live the joyful and free-wheeling life that America’s founding generation envisioned, and that their own risks and sacrifices made possible, need to make ready to head to a new frontier, for only by going where others fear to tread will we be able to build and enjoy a thriving freedom-loving Civilization again.

“The Way Out” remains my guiding compass in this endeavor. It’s a series I continue to ponder and will add to — along with the No Fear Pioneer podcast — as new ideas arise.

I’m also looking forward to hearing what Bill has been working on and hinting at on his Stratosphere Lounge podcast, as I’ve often found myself thinking along similar lines.

I’m re-posting the “Interstellar” trailer from “100 Humans on Mars, 8 Years From Now”, as its stirring 2 minutes bear re-watching.

Do not dread the future. We are going to make it.

Well, this has already gotten interesting…

It’s about time I posted some thoughts on the monumental and (to me, at least) unexpected election outcome of last week. I don’t flatter myself to think anyone has been waiting breathlessly on my analysis, but it’s an event that bears marking, and there are things that ought to be said about it in this record I’ve been keeping. (I’ve written almost nothing about this election cycle here on the blog, due partly to favoring my Twitter feed.)

Trump wasn’t my pick, and I have plenty of concerns about him — from the basic observation that he’s no small-government, free-market conservative (and has furthermore reversed his positions and schmoozed with and donated to so many office-holders of both parties in the past that his set of beliefs is clearly fungible), to his often coarse demeanor, to creepily fascist-ic remarks he’s made at campaign stops, to his overly cozy rapport with Vladimir Putin and clueless retweeting of support from the alt-right. He’s no exemplar of how to treat and talk about women, nor do I find the cronyism that’s characterized his business dealings admirable. I felt betrayed and crestfallen to learn that the GOP had crowned him its nominee.

All of that said, our choice this time around was (pardon my bluntly apt metaphor) between a shit sandwich and a crap sandwich. It’s taken a truly terrible alternative to make Trump’s candidacy even possible, and we found that in Hillary Clinton. Her role in our becoming a country that leaves its people to die in hostile territory, her knowingly lying to the American people and families of the dead about the cause of the Jihadist attack on the U.S compound in Benghazi (promising to punish, and jailing, a scapegoat filmmaker in the process), her gross negligence, at best, with matters of national security (it appears to me that she is clearly guilty of felonies, and owes her escape from prosecution to a cowardly, politically compromised FBI) — these should all have been (and evidently proved to be) deal-breakers for her candidacy, or for any other candidate’s, from whichever party. All this sits atop the fact that she clearly intended to continue pushing us down the road of incrementalist collectivization via nationalized healthcare, inflexible state-run education, and increased taxation, for she is a Progressive cut from the same loom of cloth as Barack Obama.

Trump’s rise is ultimately an unpleasant and worrisome but predictable result of people laboring for decades to chisel away at this Civilization of ours, with the ultimate goal of undermining our cultural and governmental institutions and “fundamentally transforming” us into something we were never meant to be: a collective society, built on the ruins of a former outpost of individual liberty that was tricked into giving up on itself and committing suicide. Barack Obama’s presidency was the latest chapter in that “long march”, and Trump’s ascent was propelled by eight years of an administration that belittled, berated, and condescended to half the country, that demagogued and divided to the best of its ability. It was fueled the cramming down our throats of Obamacare, and by scandals at the IRS, NSA, DOJ, and EPA. By the shameless cheerleading of a lapdog press for its anointed Lightbringer, while demonizing and vilifying the liberty-minded Tea Party movement and anyone else who dared oppose his agenda. There is plenty to dislike and distrust about Trump, but the fact is in the end it wouldn’t have mattered who the GOP’s nominee was. Said nominee — whether Cruz or Carson, Romney or other — would have been painted by the press as a villain in the extreme. So while there are plenty of valid concerns about Trump, we can be forgiven for finding it difficult to discern objections to him that sincerely target said concerns from others that we’d be hearing regardless — had, say, Ted Cruz won the nomination and the presidency. My years of experience observing the vilification of Republicans from Reagan to the present has made me quite confident of that.

I had strong reasons for wanting to vote against Hillary Clinton. Trump’s flaws were worrisome enough that I could not bring myself to vote for him, despite knowing that any other course of action would be effectively futile. It was not lightly that I cast a write-in vote for Ted Cruz, the only decision that I could feel right about in this craptacular election season. I maintain respect for others who concluded that despite Trump’s flaws he was the necessary lesser of two evils. Among them are Bill Whittle and Victor Davis Hanson, both of whom articulated ample cause for concern about Trump in the past. I fully acknowledge that whatever good a President Trump ends up doing, I cannot claim any credit for as a voter. But I am not sanguine about where we seem to be headed. This is in the best case a temporary reprieve — a chance to “stop the bleeding” as Bill Whittle put it — and, sadly, I expect it to turn out to be a wasted opportunity, at best. A popular revolt was warranted, but it seems to have been squandered on a very poor choice. As with Barack Obama’s presidency, I hope to be proven wrong, and I’ll give President Trump the same chance, but I fear I’ll be proven right.

The way ahead from here is treacherous, and seems bound to be full of missteps and disappointments, at the very least. Both the Republican and Democrat parties bear their share of responsibility for putting forth such awful nominees. But the ultimate blame for this mess rests with the perpetrators of a Culture War who have been relentless in their aim of dismantling our essential cultural foundations. Without their vain and bitterly determined attempts to steer us away from the course of individual liberty and the tightly constrained form of government needed to enable it to thrive, we would not be in such dire straits.

The week since the election has seen insanity that rivals the already insane campaign season to date: ongoing “protests”-turned-riots; claims of Trump-inspired discrimination, some proven to be fabrications (see also this); people identified as Trump voters or supporters being beaten, including this motorist, and this one, and this student, and this one; breathless comparisons of the election outcome to the 9/11 Jihadist attacks; numerous tweeted assassination threats, including threats from at least one journalist and CEO; other CEOs including Pepsi’s and GrubHub’s disparaging or threatening employees who supported Trump; celebrities who threatened pre-election to leave the country if Trump was elected apparently having second thoughts (echoes of 2004, to be sure). Meanwhile, the press has made some public displays of repentance and introspection regarding its insular bias — including the New York Times, which has vowed to rededicate itself to honest reporting after a stunningly candid confirmation that it has tailored its reporting to fit a preconceived narrative — but I expect all of that will be short-lived. (Oh, by the way: the electoral college is suddenly a sinister threat to democracy again!)

One of the more disheartening things I’m seeing is parents scaring the daylights out of their children — including children who are too young to have the historical context and skepticism to properly assess what they’re being told. The amount and extent of awfulness and unhinged ridiculousness I’ve seen in response to Trump’s election has, astonishingly, been enough to make me start feeling sympathetic to a guy I never liked to begin with. I predict it will backfire in a big way if it continues.

So, one way or another, here we are. If there’s a bright side, maybe it’s that long last the press can be expected to do its job again (sort of), dissent has surely become the highest form of patriotism again (an assertion I remember being made frequently during the Bush years), people are finding renewed skepticism and concern about the wisdom of having a powerful federal government (sadly, I expect that will last only until the next electoral reversal of the tables) … in short, the world is once more inverted, and I expect there’s going to be a lot more along those lines to keep up with in the coming years.

Some wry and apt observations from the Twitterverse:

Love trumping hate involves a lot more assault and arson than I anticipated.

If you're afraid of a Trump presidency harming your life, you're admitting the presidency has too much power. But it did under Obama, too.

Remember those Hillary campaign ads about how "our children are watching"? Yeah, about that. pic.twitter.com/UlC9sXAEVD

Calling for rape of woman because you hate her husband. Tell me again how our election set feminism back 50 years but that doesn't? #Melania pic.twitter.com/jwf7YfupCz

Hey feminists, I think I found your "rape culture". pic.twitter.com/7ISyf7TfAB

Trump is the worst man to have ever run for our presidency. He's apparently not the worst person, though.

I swear, nobody at the Washington Post can distinguish cause from effecthttps://t.co/BBW3fS8AkC

Wow, glad Trump didn't lose, someone could have gotten hurt because of his dangerous rhetoric https://t.co/eMM5G7xFNY

Of them all, this very aptly captures the seeming lack of self-reflection that’s going on: 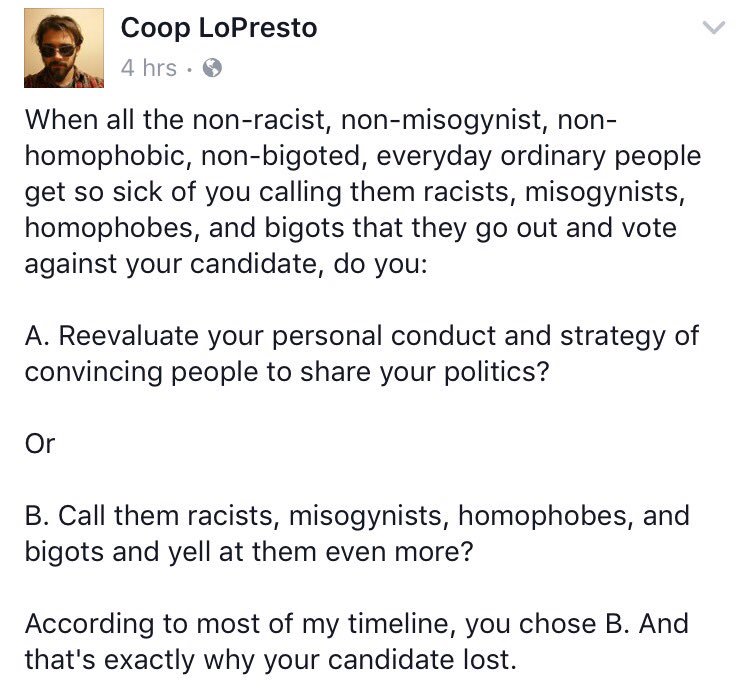 Indeed, epithets of that sort have come to be used so frequently, routinely, and loosely, they’ve lost much of their gravity, and furthermore produced an understandable backlash from the wrongly accused.

This gem from a parody account echoes the same sentiment:

If we are to win the House and Senate in 2018, we MUST strive to call every white voter an uneducated racist homophobe for the next 2 years.

Some more honest reflection regarding all this would benefit us. I hate to be cynical, but holding my breath waiting for it doesn’t seem well-advised.