Multiculturalism Has Failed, and Islam Is the Reason

Flashback: Bill Whittle articulated clearly after the Jihadist assault on Charlie Hebdo, what the subsequent Jihadist atrocities in Paris and San Bernardino further demonstrated — and what Germany’s Angela Merkel, Australia’s John Howard, and Spain’s Jose Maria Anzar have themselves ceded. (See also here.) Multiculturalism’s anti-assimilationist streak, when combined with a militantly political religion of conquest, produces unassimilated populations that end up violently hostile to their naive and increasingly disarmed host cultures. “Tolerance” of such hostility is not noble; it is nothing short of suicide.

I took to Twitter in the aftermath of November 13th’s horrific, barbaric Jihadist attacks on Paris and her people, rather than posting here. To my resigned dismay, I am at a loss to see what more can be said at this point, or what will change the state of deep denial about such things that we seem to be stuck in. It’s excruciating watching this horror recur so predictably, and I wonder, as I have for so very long now, what it will take for the West to wake up, stop making excuses for Jihadist atrocities, and really and truly stand up for its values.

The Charlie Hebdo massacre, less than a year ago, should have been more than enough to make that happen — as, to be honest, should any of the innumerable prior acts of Jihad against the West. Much of the world briefly united, declaring “Je suis Charlie!” in a sincere but symbolic defiance and resolve that evaporated after a time, ultimately returning us to our slumber. This time around, it was “Cette fois, c’est la guerre.” But that sentiment, too, has already faded, and it’s unclear to me that it will have any lasting consequence for our actions. Before the day was over, the usual suspects in the press were dutifully reinforcing The Narrative, wringing their hands about mythical anti-Muslim backlash that fits their perpetually low opinion of their countrymen, rebranding a deliberate, premeditated atrocity as a “tragedy”, and generally doing the enemy’s propaganda job for them. We’re back to rearranging the deck chairs. We’ve learned (or have we?) that “Holding hands for a feel-good photo opp. gets us nowhere in the fight against terrorism.” “In a month most of Europe will be back to giving cultural sensitivity training and talk of ‘war’ will be forgotten.” Lather, rinse, repeat.

As has been rightly said before: It’s not a wake-up call, if we go back to sleep. Mark Steyn’s reflection on the Paris attacks was among the most apt: The Barbarians are Inside, and There Are No Gates. James Delingpole’s assessment was likewise on target.

Whether or not we are interested in war with Jihadis, they have made quite clear, time and time again, that they are profoundly interested in war with us. Dreamy-eyed insistence on “peace” in the face of acts of war (which the iconic Eifel-Tower-recast-as-peace-sign graphic that circulated in the wake of the attacks seems to ask for) is an act of pure, blind surrender. Honestly, “It must be incredibly frustrating as an Islamic terrorist not to have your views and motives taken seriously by the societies you terrorize, even after you have explicitly and repeatedly stated them. … It’s like a bad Monty Python sketch” — one that would be funny, if the consequences weren’t so grave. It no doubt comes as quite a devastating surprise to ISIS that they are “not Islamic”.

“We in the West have reached such a low in self-esteem that we do the job of defeating ourselves even better than the enemy,” noted Allen West. Make no mistake, that low in self-esteem is by design — the result of dedicated work by many, over a long period of time. It’s been wrought by people who sincerely believe that we are worse than our enemies.

I’ve pleaded for an end to this willful blindness, as have others with far greater eloquence, dedication, and courage. By now, we’ve been shown more than enough to be able to see that shunned and vilified critics of the Islamic world like Pamela Geller, Robert Spencer, Tarek Fatah, Brigitte Gabriel, Ayaan Hirsi Ali, and others have been right to sound the alarm. “Tolerance” is all well and good in theory, but “When tolerance becomes a one-way street, it leads to cultural suicide.” You can’t tolerate people whose chief ambition in life is to kill you. 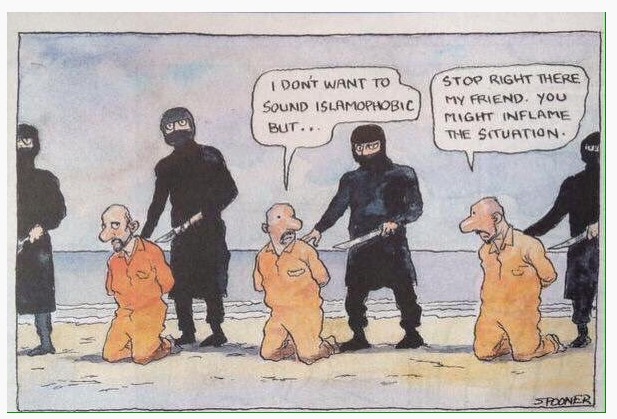 Below was the scene in the Bataclan Theater, where people were gunned down and tortured by having their stomachs slit open, where survivors pleaded for the lives of their loved ones and waited helplessly as tens of minutes went by, wondering whether they and theirs would be next to be systematically murdered by Jihadis who stood there, methodically reloading without any apparent fear of being stopped. It grieves me to have to post something like this. There is a temptation to look away. We mustn’t. This is the face and work of an enemy that will not relent until we decisively confront and unconditionally subdue its murderous, bloodthirsty army. This is utterly barbaric. There is no excuse for it. We must at long last find the moral courage to commit to decisive actions that match our ephemeral and easily uttered words of defiance, or those words will have had no meaning. 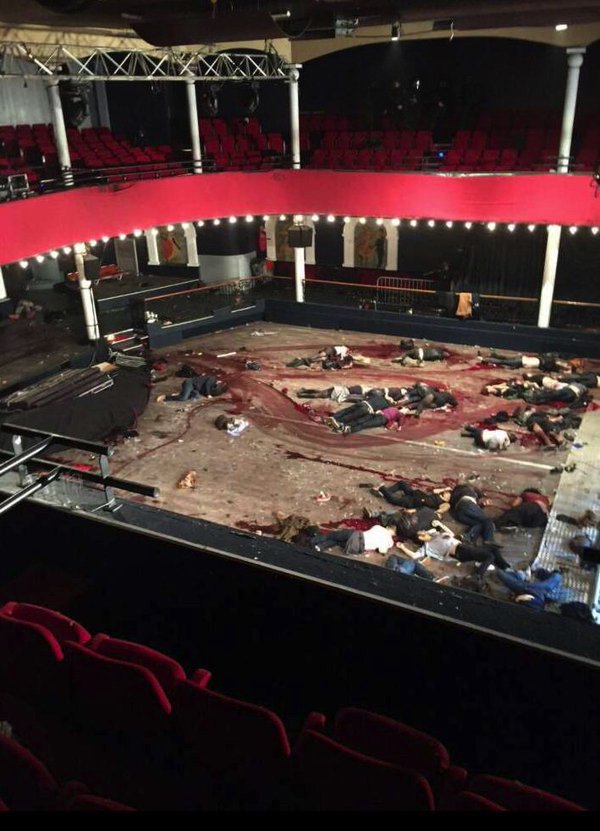 What We Can Learn From the Gratitude of Immigrants

Anecdotes such as this should put our domestic self-criticism in perspective, and remind us how very much we have to be grateful for. These are the people who flock to frontiers without hesitation, and build prosperity out of little more than freedom, opportunity, determination, and irrepressible optimism. May we always welcome such appreciative new citizens:

On Constitution Day in Philadelphia, 48 new Americans were naturalized, representing 18 countries from Argentina to Vietnam. The citizenship candidates and their families filled a small auditorium, they sat through welcoming speeches, including one from retired U.S. Supreme Court Justice Sandra Day O’Connor. They understood that it was a big deal.

They were an appreciative, demonstrative audience, if not Emma Lazarus’ “wretched refuse” of a teeming shore. Many are educated, with their eyes fixed on a shiny future as Americans. They might not all succeed, but they know they are free to try, so they are not complaining.

For the small number of you who think that America is bad, or mean, or evil, come convince our new Americans. You’ll die trying.

They don’t measure America by a dreamy, utopian ideal, they judge America against realities of the world in which they had lived. Despite wars and recession, they cast their lot with us because they know that in the totality of liberty, opportunity and equality — even the freedom to fail and try again — America is matchless.

To some of you, this is flag-waving fiction. To our newest Americans, who have lived here for years while qualifying for citizenship, it is fact.