I’m going to hold off a bit longer on posting my own 9/11 recollections, as otherwise promised yesterday. I’m not quite satisfied with what I’ve got yet, and it’s important to me to get this right.

Meanwhile, some highlights of the best stuff I encountered during this year’s trip through the news sites and blogosphere:

Via PowerLine, Debra Burlingame, sister of the pilot of American Flight 77 that was crashed into the Pentagon on 9/11, warns us not to “misremember”

There is a disturbing phenomenon creeping into the public debate about all things 9/11. Increasingly, Sept. 11 is compared to hurricanes, bridge collapses and other mechanical disasters or criminal acts that result in loss of life, with “body count” being the primary factor that keeps it in the top spot of “worst in the nation’s history.”

Misremembering is as dangerous as forgetting. If we must know one thing, it is that the Sept. 11 attacks were neither a natural disaster, nor the unfortunate result of human error. 9/11 wasn’t the catastrophic equivalent of a 3,000-car pileup.

The attacks were not a random act of violence or insanity. They were a deliberate and brutal act of war committed by religious fanatics engaged in Islamic jihad against the United States, all non-Muslim people and any Muslim who wishes to live in a secular society. Worse, the people who perpetrated the attacks have explicitly told us that they are not done.

[T]here has still never been a full and comprehensive discussion of the jihad threat in the American public square.

So seven years after the Towers went down and the Pentagon was wounded, the jihadists have every reason to smell victory — not in Iraq, where they are indeed on the run, but in their efforts to cow and intimidate the West into giving up all resistance to Islamization. It’s happening, but no one notices or cares, because it is happening in small steps.

Gateway Pundit asks: Why the relative silence from al-Qaeda on this seventh anniversary of 9/11?

New York-based Pamela Geller at Atlas Shrugs has pictures of this year’s 9/11 observances (and no small amount of accompanying lunacy) at Ground Zero.

(Update 9/14: Pam has video from her Ground Zero visit too: 911 “Truthers”, Bagpipes, and Great Americans)

Lahawk has a roundup of Ground Zero rebuilding news.

Neo-neocon re-posted an apropos piece from 2006, that touches, among other matters, on the foresight we wish we’d had in anticipating and guarding against the attacks:

But the clearest foreshadowing of the event that would henceforth be known only by those numbers, “9/11″—as though words were somehow inadequate to describe it—was its most direct predecessor, the 1993 World Trade Center bombing. That earlier attack distinguished itself in audaciousness by being the only large-scale Islamist totalitarian terrorist attack within the boundaries of the United States prior to 9/11.

And it was every bit as serious in intent. The only reason it wasn’t taken as seriously as it should have been was the seemingly Keystone Cops-like incompetence of its perpetrators. They would learn from their errors, and quickly. It would take us longer to learn what we needed to know.

If there is one thing we should have learned since 9/11 its that absolutism is deadly. Its stultifying effects on debate precludes any kind of rational response to the serious threat of Islamic terrorism.

It is not the trivial things that separate us. It is nothing less than losing trust in the intentions and motivations of the other side. And 9/11 took a nation already split along cultural and ideological lines and added fear to the mix. Now each side sees the other not just as wrongheaded but truly evil, and opposing them becomes a matter of saving the country.

In that small space between three hijacked planes and color-coded terror alerts, between a small field in Pennsylvania and conspiracy theories, there was a brief, lit-up moment when we felt like one. I remember thinking that this tragedy would fix us instead of break us. I want so much to feel again that hope and unity that existed in the days after the attack. There was proof, ever so briefly, that we could come together as a nation to help and comfort each other, when we were all just human beings on common ground instead of left or right, Democrat or Republican.

Never forget, indeed. Never forget that out of the rubble of tragedy arose a moment when we put everything aside to be one whole nation. It is so easy at a time like now to forget that, to draw lines in the sand and become us and them. In so many ways, 9/11 ended up furthering any divisions we had instead of closing them. We chose up sides and backed away from each other as if we were our own enemies — as if the enemies we had, those who steered planes into buildings, weren’t enough. 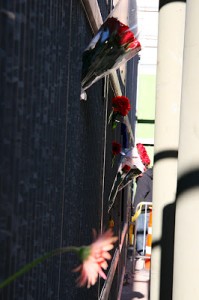