What can I say about that horrific day eleven years ago, and our response in the years since, that I haven’t already written, quoted, or linked? Last year, I wrote a carefully thought-out plea to my fellow countrymen and citizens of the civilized world, arguing that it is crucial for us to open our eyes to Jihadists’ intentions and squarely face what we are up against. If you are in doubt about the danger we face, please go there and give it some thoughtful consideration. We are sabotaging ourselves — hobbling our own ability to understand, and decide what we must do to prevail against, a determined foe — and we have got to stop.

Last February, I paid the first visit of my life to the Statue of Liberty and Ellis Island. There’s a ferry to Liberty Island and Ellis Island that departs from Liberty Park, New Jersey, and at that site, next to a historic former rail station that served as a gateway to America for tens of thousands of immigrants, there now stands a stirring and fitting memorial to New Jersey’s victims of the 9/11 attacks titled “Empty Sky”.

I’m not usually a fan of the stark, industrial-modern style of memorial that has followed in the footsteps of Maya Lin’s Vietnam War Memorial, but I think what was done at Liberty Park works well.

Parallel walls, 30 feet high and as long as the Twin Towers were wide, carve out a channel that’s oriented toward the World Trade Center site. Entering the space between the walls evokes the awe-inspiring sensation of standing between the towering buildings. Meanwhile, your eye is drawn down the man-made channel toward Ground Zero, just across the Hudson — a view that tends to focus the mind.

You also find yourself in a private, contemplative space where the names of New Jersey’s 9/11 dead have been inscribed and can be read on the interior wall surfaces. I found it a fitting memorial overall — far from the cold and sterile monument one might expect from its physical description. Any possibility of that is canceled out by the pair of steel beams recovered from the World Trade Center wreckage, that sit starkly at the far end of the channel just outside the walls. If anything, the absence of human forms (one of the common characteristics of modern memorials that usually rubs me the wrong way) succeeds in evoking a sense of loss and absence — a seemingly fitting reminder of those who were taken from us that day. Also, bear in mind where this memorial sits. Anyone standing at this site on the morning of September 11th, 2001 would have had a clear view of the horror, as American Airlines Flights 11 and 175 were flown by fanatical Jihadists into the World Trade Center towers. 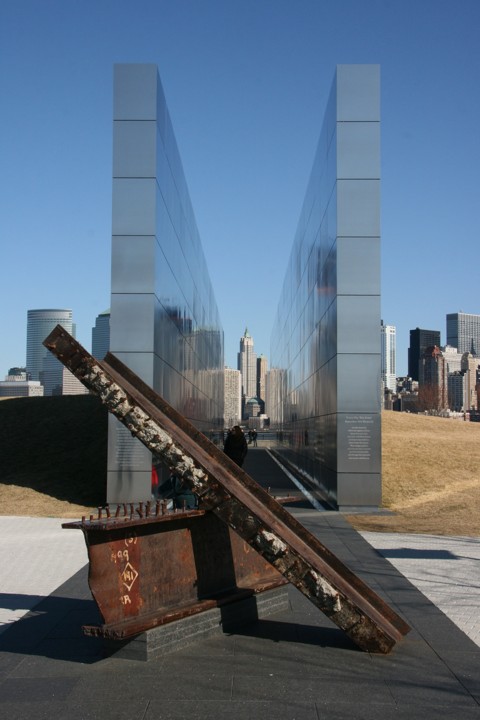 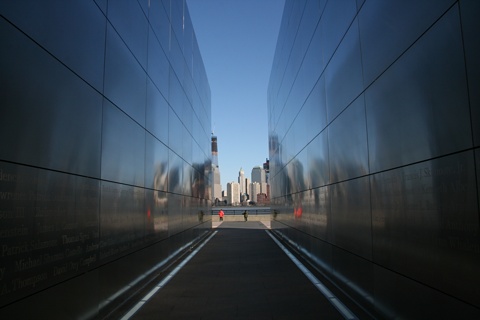 Here’s what the memorial looks like from the side: 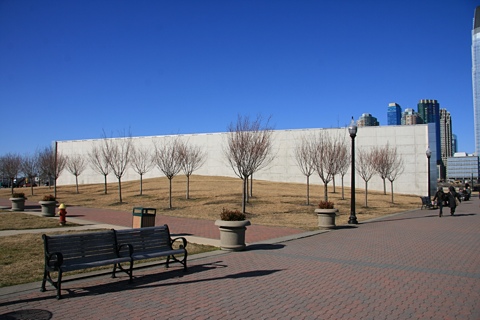 At each end, the walls are inscribed thusly: 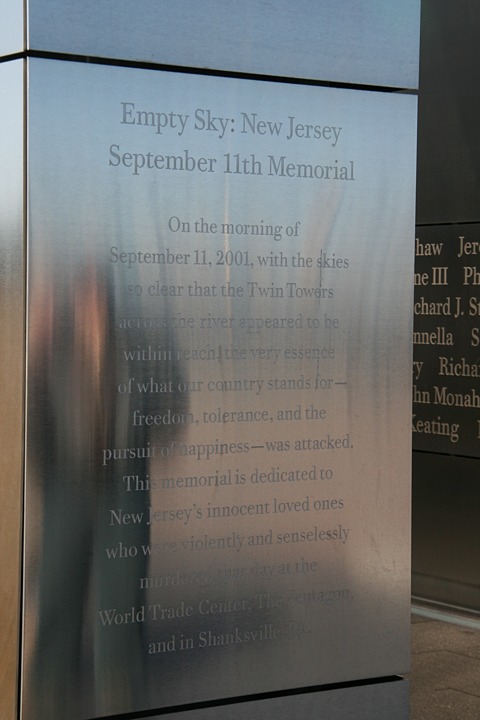 On the morning of September 11, 2001, with the skies so clear the Twin Towers across the river appeared to be within reach, the very essence of what our country stands for — freedom, tolerance, and the pursuit of happiness — was attacked. This memorial is dedicated to New Jersey’s innocent loved ones who were violently and senselessly murdered that day at the World Trade Center, The Pentagon, and in Shanksville, PA. 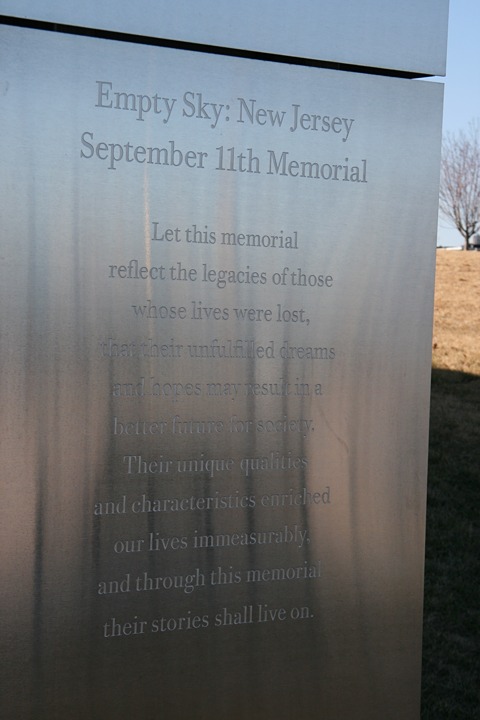 Let this memorial reflect the legacies of those whose lives were lost, that their unfulfilled dreams and hopes may result in a better future for society. Their unique qualities and characteristics enriched our lives immeasurably, and through this memorial their stories shall live on.

Note the fairly unflinching terms in which the attacks are described: those killed on that day were violently and senselessly murdered. Such moral clarity is too rarely seen, and welcome in my book. While it’s not clear to me how a memorial that immortalizes the victims’ names alone can succeed in helping their stories to live on, I give this design credit for getting a lot more right than wrong.

More pictures of the memorial can be found here.

Here’s what Lower Manhattan looked like from that vantage point last February, by the way: 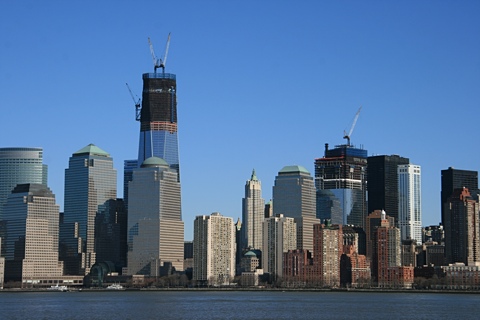 Here’s what it looked like when I visited again ten days ago, on September 1st: 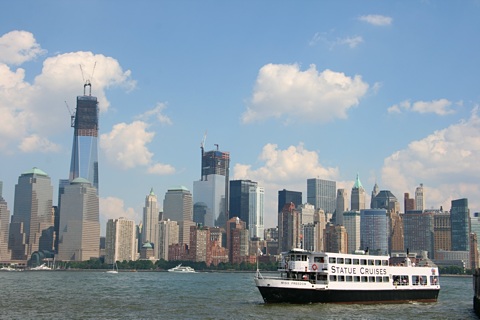 You can see clear progress on WTC 1 (left) and WTC 4, relative to the heights of the surrounding buildings. WTC 1 recently reached its symbolic final height of 1,776 feet. As I’ve written before though, it’s troubled me that it has taken us so long to rebuild at the WTC site, relative to what I know we’re capable of. The original World Trade Center towers opened 4 and 6 years after construction began. The Empire State Building, a smaller but still substantial high-rise project, was completed in a mere 410 days. During the Great Depression. We can still achieve such feats, if we choose to. Do we still have it in us? 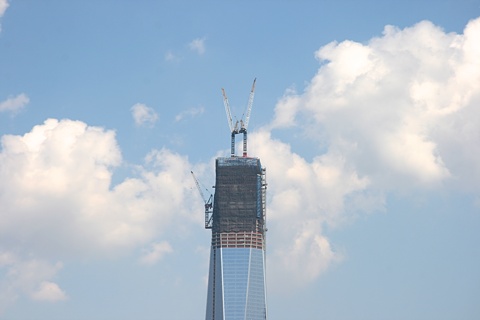 Speaking of memorials: I have yet to visit the 9/11 memorial that is now open at the World Trade Center site. The need to obtain a ticket, and the advance planning that that requires, has only served to enable my hesitation about visiting. I visited Ground Zero two weeks after the 9/11 attacks, then again in November 2007 (and later posted some pictures from that day), but somehow the thought of visiting the completed memorial seems a different proposition. I just don’t know whether I can handle it without getting tremendously upset all over again. I’m not someone who needs convincing about the sorrow and grave implications of that day, and I don’t think I would find any solace there. But I know I’ll probably end up overcoming all that and visiting someday, and when I finally do, I’ll write about the experience here.

Here at the lake, it’s a crisp, clear day that can’t help but evoke one that began similarly eleven years ago. 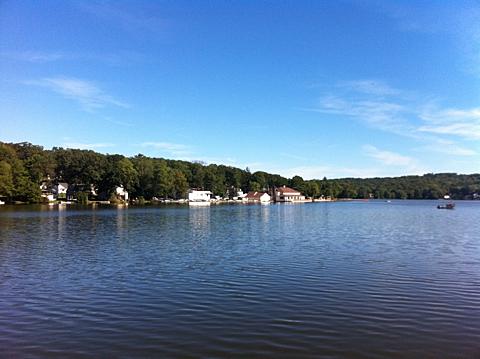 I went for a morning run, feeling grateful that, unlike so many whose lives and dreams and ambitions were cut short that day, I am still here and have the precious opportunity to continue to strive against my limits. Our local volunteer fire department has a commemorative message up. A fraternity of first responders forged in a shared willingness to run toward danger will not soon forget its fallen heroes. Nor should we. 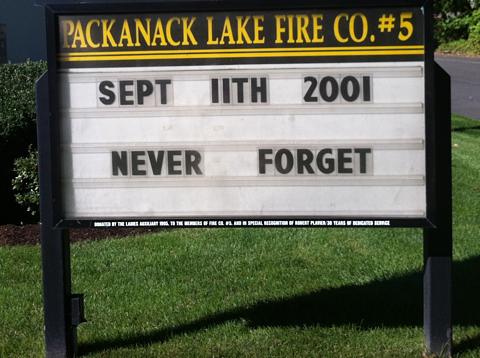