A bit late to the party, perhaps, but I’ve created a Twitter account. My feed, for any who may be interested in taking a peek or following it, is at http://twitter.com/kulak76

I’m thinking I’ll give Twitter a serious try for at least a good month or so — posting at least one “tweet” a day (if not a few more) about what I’m up to or what’s on my mind as I go about the business of life. I’ll continue blogging here as usual when I find the time and inclination to point out interesting articles, or to write more substantive stuff, but I’m intrigued by the idea of supplementing blogging with a more immediate way to toss out casual thoughts, and maybe even (with any luck?) connect more effectively with others who have similar interests.

My blog-reading habit, together with the occasional posting I do here, has provided a priceless gateway to deeper thinking about issues that weigh on my mind, as well as a certain much-appreciated sense of loose-knit community and just plain “not-alone-ness”, in discovering that there are others who share similar feelings and concerns. I’d hate to have to life life without a place to write about such things, or without my periodic visits to the neighborhoods of the blogosphere that I frequent. But even during times when I’m keeping up relatively well with all of that, I feel a remaining distance at the end of the day between me and others of my kind. Can tweeting help close that gap a bit? It will be interesting to see. I imagine much will depend on finding some intersection between the Twitter-sphere and people I’ve started to get to know in glorious Blog-ville (since blithering alone into a vacuum can only hold its interest for so long — even for me), and/or discovering other interesting feeds to follow.

One intriguing aspect of the Twitter format is that gathering together a group of people who follow one another’s Twitter feeds is a bit like creating a long-lived, slow-motion/casual-turnaround chatroom of sorts. The participants don’t all have to be online at the same time, which could otherwise present a problem for those in different time zones (the reason I’ve been such a stranger at The Chase Lounge, though I don’t mean to be). You can show up now and again, catch up on what others are up to, post, and either stay logged in for a bit of back-and-forth if others are online at the same time, or come back later without missing the conversation.

Anyhow … all the above is probably way too much thinking for something meant to be fun and casual. Consider this an invitation to follow my Twitter feed if the fancy strikes you.

Don’t have a Twitter account? Create one; they’re free! (No, I don’t work for Twitter, and I have no part whatsoever in the Vast Twitter Conspiracy, no matter what anyone tells you to the contrary. I have merely drunk the Kool Aid flavor of the month and found it satisfactory.)

Incidentally, I’ve been using the Iconfactory’s excellent “Twitterific” app on my iPhone to read and post, and am liking it greatly so far. 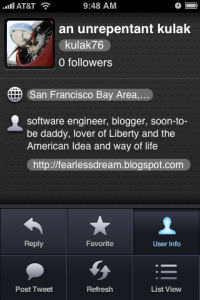 The free version does just about everything that the ad-free, theme-enhanced $9.99 version does, but I expect I’ll soon move up to being a paying customer if I continue to find Twitterific useful. One of its nifty features is a Javascript bookmarklet that sends the URL of any page you’re looking at in Safari to Twitterific for inclusion in a tweet. (Twitter then replaces it with a space-saving TinyURL.) Posting pictures is fully supported too (from your existing photo library, or taken on-the-fly). I’ve taken much advantage of both of these features already.