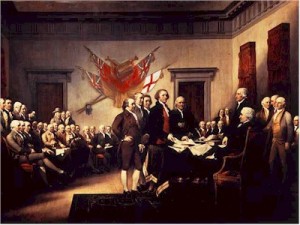 With the signing of America’s Declaration of Independence on July 4, 1776, the bravest members of our founding generation pledged “their lives, their fortunes, and their sacred honor”, assuming tremendous personal risk so that an independent nation of free people, the like of which the world had never seen, might have its chance at an anything-but-certain beginning. Today — two hundred and thirty-three years later — we are still free because of their vision, courage, and sacrifice.

I’ll be out celebrating today with my wife, her mother, and our four-month-old son, starting with a neighborhood parade in the morning (we’ve got our son’s stroller all decorated!), then on to enjoy other parades and festivities in Foster City and maybe Redwood City, wrapping up with watching fireworks (of course!) that I hope our little guy is still awake to see.

In celebration of the occasion, I offer a playlist of some of my favorite liberty-themed songs, along with this concluding passage quoted from Stephen Vincent Benét’s 1941 radio script “Listen to the People”, which I’ve mentioned before and highly recommend reading in its entirety. Its words ring as true today as ever.

Find it and keep it and hold on to it,
For there’s a buried thing in all of us,
Deeper than all the noise of the parade,
The thing the haters never understand
And never will, the habit of the free.
Out of the flesh, out of the minds and hearts
Of thousand upon thousand common men,
Cranks, martyrs, starry-eyed enthusiasts,
Slow-spoken neighbors, hard to push around,
Women whose hands were gentle with their kids
And men with a cold passion for mere justice.
We made this thing, this dream.
This land unsatisfied by little ways,
Open to every man who brought good will,
This peaceless vision, groping for the stars,
Not as a huge devouring machine
Rolling and clanking with remorseless force
Over submitted bodies and the dead
But as live earth where anything could grow,
Your crankiness, my notions and his dream,
Grow and be looked at, grow and live or die.
But get their chance of growing and the sun.
We made it and we make it and it’s ours.
We shall maintain it. It shall be sustained.

Following are some favorites new and old from my music library, with iTunes and Amazon links provided for your convenience. The songs span a range of styles/genres, such that I’m not sure this holds together incredibly well as a mix album, but on the upside there should be a little something in here for everybody (and I love ‘em all).

Steve Vai’s glorious 1990 guitar anthem “Liberty” spills over with soaring celebratory joy, and is about as natural a first track for a playlist as they come. Jon David’s “American Heart” is a brand new favorite I just discovered two days ago, thanks to a recommendation from my good Twitter friend, songwriter @ConservativeLA. With its timely message, it won me over instantly. “Go on, raise the flag / I’ve got stars in my eyes / I’m in love with her / and I won’t apologize.”

Some of my selections aren’t specifically patriotic songs, but fit the broader theme of freedom in some way. I put Aretha Franklin’s “Think” next because I just love, love, love it when she busts out with gospel verve singing “Freedom! Freedom! Freedom! Freedom!”. After having that bit stuck in my head for ages, I finally identified the song it was from this year. Love it.

The Cult’s “Wake Up Time For Freedom” is next. I just couldn’t resist. (The entire “Sonic Temple” album rocks mightily, by the way, and is a must-have.)

Next up, another great guitar anthem, the end title theme from “Top Gun”. This soars with so much of Eddie Van Halen’s phrasing style that I’ve always mistakenly attributed it to him. A great, soaring track that ages well in my book.

I wrote about Stuck Mojo’s “I’m American” last month — another much enjoyed new discovery this year, also thanks to @ConservativeLA. “Hate me, blame me / You can’t shame me / Come and stand with me / I’m American.” Rock. On.

Then it’s “Freewill” by Canadian prog-rock power trio Rush, as great a celebration of freedom in music as I’ve heard. The live version I linked to is from the same, excellent “Exit…Stage Left” album whose “Red Barchetta” inspired the title of my blog.

As with many a Cole Porter song, Ella Fitzgerald sings “Don’t Fence Me In” like no one else can. A truly great and fun song and a timeless classic beautifully done; one of my wife’s favorites too.

John Ondrasik writes and sings some truly great original songs under the hockey-inspired band name Five for Fighting, and has been a loyal supporter of America’s deployed fighting men and women. “Freedom Never Cries” is a timely meditation on taking our freedom for granted, and the way events can wake us up to a renewed appreciation of its preciousness. “I took a flag to a pawnshop / for a broken guitar / I took a flag to a pawnshop / How much is that guitar? / What’s a flag in a pawnshop to me?” The next track I’ve included, “Johnny America”, picks up the mood with an unsurpassed expression of American optimism against all odds. “Here comes Johnny America / Riding hard up Mission Hill / Some say he’ll make it to the top today / Some say he never will / Though he’s just a child at heart / he’s old enough to fall / Nobody in a hundred years / can touch him, faults and all”

Tom Petty’s “American Girl” is just plain fun, and “Into the Great Wide Open” is to me a classic expression of the American Dream.

I put Madeleine Peyroux’s rendition of “This Is Heaven To Me” (a great song whose history I’m very interested in but haven’t managed to track down yet) next to last, because I just can’t manage to listen to it without getting all choked up with tears in my eyes. If there is a more perfect expression of what freedom means, sung with more beautiful grace, I haven’t heard it yet.

When I hear them say, there’s better livin’
Let them go their way, to that new livin’
I won’t ever stray
‘Cause this is Heaven, to me

‘Long as freedom grows, I want to seek it
If it’s “Yes” or “No”, it’s me who’ll speak it
‘Cause the Lord, he knows
That this is Heaven, to me

If you’ve got your hands, and got your feet
to sing your song all through the street
You’ll raise your head when the day is done,
shout your thanks up to the Sun

I close the playlist out with a piano instrumental: Oscar Peterson’s by turns reverential, playful, and celebratory “Hymn to Freedom”. A true gem.

Hope you all find something new to enjoy in here. Wishing you a very happy Independence Day! 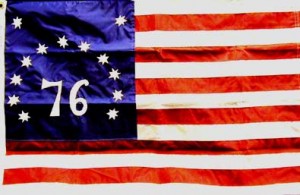